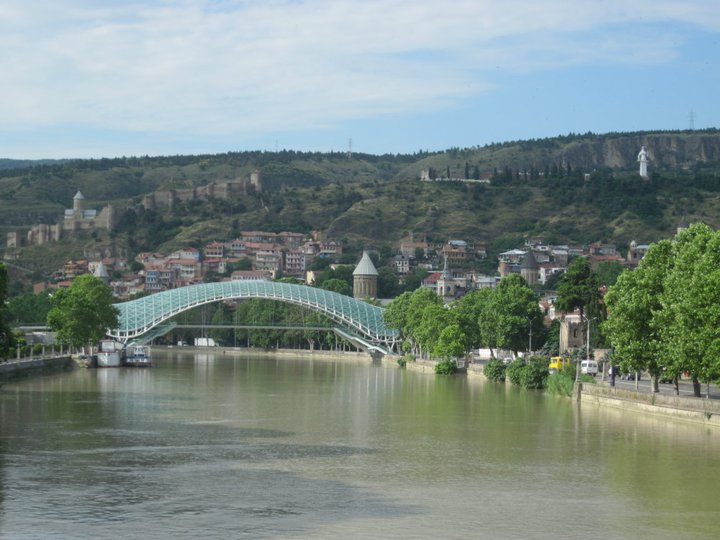 Marshutkas are crowed, smelly mini buses. They are the standard form of transportation in every city and between cities here in Georgia. The great thing about them is that they are cheap and easily spotted. The bad thing about them is they are excruciatingly uncomfortable. You get smashed against the windows, or worse two strangers. Most of these strangers do not bathe as frequently as my timid American nose is used to. If you are carrying anything with you from a purse to a luggage bag, you had better hope that it can survive being crushed even more than your body and being thrown around some. Finding a bag that satisfies these requirements and can carry a 17″ laptop is a tedious and frustrating journey.

I first attempted to find a large black purse in the Poti market that would fit my English books and laptop. Most Georgian women walk around all stylish and posh with a large metal studded, fake leather purse. My purse just didn’t fit the requirements of Georgian streets even if it did fit all my books; which it didn’t. (For the record, I never buy any bag unless it can fit at least one standard paperback book 😉 Not always the easiest thing to achieve.)I bought two different bags that fit the requirements and had both break and be torn apart in one week. The continual rain and tribulations of riding in marshutkas did them in. I gave up on style at that point and just wanted to find a sturdy bag that would fit all my stuff. Weeks of searching yielding nothing. I even recruited volunteers in other cities to help me search.

Finally, I ordered ThinkGeek.com’s “Bag of Holding”. My dearest parents then shipped that and my kindle (New purse requirement: must fit kindle. Who knew life could be so easy!) over here to Georgia. I was told that the service I used, usa2georgia.com, would provide courier service to Poti. They did not. I can’t complain, though, since it only cost me 45 GEL to ship a medium sized package to Georgia. That’s a steal compared to the $300 with USPS or FedEx. The problem remained on how to get the package from Tbilisi, the capital, six hours away.

Yesterday, I braved the mountain roads by boarding a marshutka in the morning headed to Tbilisi. This one was crowded but not terribly so. I could keep to myself with my MP3 player. It was a long ride, six hours. None of the marshutkas have new or comfortable seats. Eventually, your but will hurt from sitting so long. Mine did.

When I got to Tbilisi, I met Ana in a taxi. She helped me translate to the driver where I needed to go. I picked up the package at the station from a super nice and English speaking woman. TLG or ex-patriots in Georgia, http://www.usa2georgia.com is definitely the way to get supplies from the states. They were awesome. After that we stopped at McDonalds for a hamburger. I’m not a fan at home in the states, but seeing those golden arches did make me smile a bit. The food is mostly the same. The menus just don’t have prices, are written in Georgian, and don’t feature any value meals or the dollar menu. In another taxi, I headed to the bus station again. All of this took a little over an hour. Perfect timing! I managed to get on the last bus headed back to Poti by five o’clock.

The marshutka going back was even more crowded than the first. I was squished in the back seat. I sat next to a very nice and friendly Georgian man from Telavi. The only problem was that I could tell that he distinctly was not wearing deodorant. It was kinda gross!

I can though, say that my new bag is marshutka proof. It was all worth the effort. I have triumphed over evil, righted wrongs, and proven my worth. . . as a marshutka passenger.

I am passionately curious about how an earth-centered spirituality and lifestyle can bring peace and wisdom to my life. Esoteric Moment is the online, sacred grove where I can share the wisdom found in Druidry, Pagan Books, and Permaculture with others who share this passion. When I'm not online I am raising twin sons, Rowan and Tristin and am developing a permaculture farm in the Driftless Region in Wisconsin.